I've been hugely busy for months now, and have neglected a lot more than just this poor blog. Even this post is only going to be a flying visit for now.

My short, The Eyes are White and Quiet (originally published in Titan Books' New Fears), is to be reprinted by Prime Books' Year's Best, 2018, edited by Paula Guran.

My novelette, Better You Believe, about an ill-fated climbing expedition in the Himalayas, gets first billing (and reprinting) in Night Shade Books' Best of the Year, Volume 10 (also to be published in audio). It was also selected for Best of the Best, which has already got a fantastic starred view from Publishers Weekly here. Both books are, of course, edited by the one and only Ellen Datlow. John Joseph Adams of Nightmare Magazine has also acquired the rights for reprint, and I'll update when the issue # is confirmed.

My novelette, Deep, Fast, Green--set in a modern-day Edinburgh and a World War Two submarine--is to appear in Echoes: The Saga Anthology of Ghost Stories, which will be published by Saga at Simon & Schuster in August 2019.

And finally, my first collaborative story, In the Gallery of Silent Screams, co-written with the very talented and very lovely Chris Kelso, is to be published in the next issue of Black Static (#65). It was an astonishingly painless experience that I would probably not be averse to repeating! See the fantastic accompanying artwork below, courtesy of Dave Senecal.

So, you know, I have been busy, honest.

And I also have something even more wonderful in the pipeline that I'm not allowed to announce yet, so watch this space!! 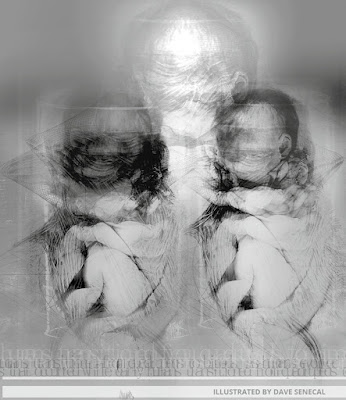