Best Horror of the Year, Vol.7 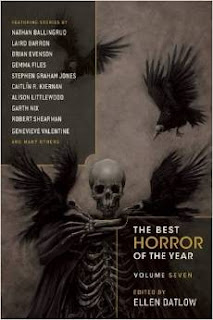 The Best Horror of the Year, Vol.7, edited by Ellen Datlow is now available to buy in the US and the UK. I last had a story selected for this brilliant series back in 2010 with Dead Loss, and although I’ve had a few honourable mentions in the years since, I’m so pleased to be reprinted again.

This time, the story is called Departures, and it was selected from my short story collection, The Bright Day is Done. (By happy coincidence, Dead Loss can also be found in the same collection...) :-D

Catching Flies, which appears in Fearful Symmetries and the forthcoming The Monstrous was also one of Ellen’s top 50 Honourable Mentions printed at the back of the book.

And three other stories made her full recommended list:

And finally, just to really make my year, Ellen Datlow also had this to say in her 2014 Summation at the start of the book:
“The Bright Day is Done by Carole Johnstone (Gray Friar Press) is a terrific debut collection of seventeen stories by a British writer whose work has been published in Black Static, Interzone, and a host of anthologies including The Best Horror of the Year and The Best British Fantasy. Five of the stories and novelettes are new. A must-read.” ©Ellen Datlow


The Best Horror of the Year, Vol.7 was recently reviewed by SFRevu:
“...My favorite stories are "It Flows from the Mouth" by Robert Shearman, a wonderful piece told in a superb narrative style, which casts some light on the little mysteries of our existence by portraying a strange friendship surviving beyond the grave, and "Departures" by the amazing Carole Johnstone, an outstanding tale set in the departure section of an airport, incredibly well told and frightening in the extreme. In short, a great anthology not to be missed.”
©Mario Guslandi
You can read the whole review here

Finally, SF Signal are running “a series of guest posts featuring the authors of The Best Horror of the Year Vol. 7. Each gives us a glimpse into the how and why of each story.” Here's the link

And here is my how and why:
I hate airports almost as much as I hate tube trains; more specifically, I hate departure lounges. Even more specifically, I hate domestic departure lounges. They’re cattle markets. Flights land and then take off again with mindboggling speed; arrivals often have to battle their way past impatient queues determined to take their place before they’ve even managed to leave. No quarter is given to late arrivals or the confused. They’re soulless, noisy, pitiless, desperate places, and when I’m forced to be in one I’d rather be almost anywhere else.

As well as making me tense, nervous, bored, and frustrated, airports also make me very, very stupid. I’m forever going the wrong way; making an art out of looking guiltily shifty; panicking about losing my passport and boarding card, despite rarely losing anything that I’m not hanging onto for dear life wherever I go; wearing as many metal things as possible, so that I beep enough to deserve literal exposure in the dreaded body scanner; stressing about my plastic bag being the wrong size or whether or not lip balm is a bloody liquid; making ill-considered jokes about a party I went to last week while a biosensor checks my hand luggage. And really panicking about being late – about Missing The Flight!!! – to the extent that I’m always far too early.

On one such occasion, I was in Stansted airport waiting for a flight to Edinburgh. I’d just come through security, and as usual, I got caught up in the mass hysteria of Missing The Flight!!! (these come in waves, I’ve found, but whenever there is a sudden, noticeable shift of people in one direction, you can be sure that a wave is about to begin). I blindly followed this exodus, of course, and ended up at the departure gates’ lounge – you guessed it, far too early for my flight. I sat down anyway – seats in domestic departures are like gold dust – and it was only when everyone around me started stampeding towards the Belfast flight gate that I realised I’d been sitting at the wrong gate anyway. Again.

I waited until the flight had boarded before getting up and nonchalantly wandering back towards the right gate, pretending that I wasn’t a moron. It was quite late at night, and the Edinburgh flight must have been the last of the day, because I suddenly realised that the place was nearly deserted. A deserted domestic departure lounge is almost as intimidating as a packed full one. It was incredibly creepy. The shops were mostly shuttered; the gate corridors yawned empty, opening onto nothing but empty space (really creepy); the flashing, beeping puggies were my only companions, and I marvelled at the contrast – the weirdness of it. That lull didn’t last long – a few minutes at most – and then the place started filling up again, making me wonder whether I’d imagined the whole thing completely. So I wrote a story about it. And I started writing it while sitting at that correct gate, feeling vaguely smug while all around me panicked waves rolled and crashed and went the wrong way.

Here are the direct links to buy The Best Horror of the Year, Vol.7 at:
Amazon uk
Amazon.com
Night Shade Books
Posted by Carole at 07:46