Not quite sure how I forgot to post about this, but still managed to whinge lyrical (and extensively) about Myself-In-General. Probably answered my own question there...

Anyway, here it is: my short sci-fi Romeo and Juliet story, Circa Diem, which appeared in Interzone #262, published in January. I love Interzone, and always feel like a clod-hopping interloper whenever I'm lucky enough to get a gig. The artwork (courtesy of Richard Wagner) is as amazing as ever.
I love it: 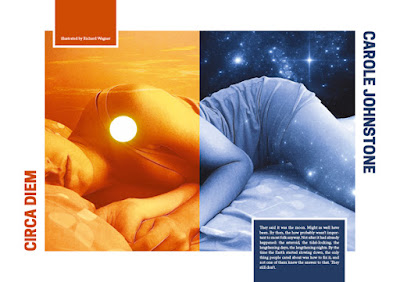 Text: "They said it was the moon. Might as well have been. By then, the how probably wasn’t important to most folk anyway. Not after it had already happened: the asteroid, the tidal-locking, the lengthening days, the lengthening nights. By the time the Earth started slowing down, the only thing people cared about was how to fix it, and not one of them knew the answer to that. They still don’t."